How to solve the banking crisis

Talking with the most over-qualified man I know... Dr English (2 letters in front of his name - and 17 after not including brackets) and we wonder gently why amid all the talk of cuts and deficits, no-one mentions the obvious. Shouldn't we think about raising taxes?

1p on income tax for most of us - 2p for the rich - and the deficit more or less disappears. No cuts in services, no need to fork out for benefits, no repossessions. People tighten their belts (but not by an excruciating amount), some grumbling but no riots in the streets. And no need to steal the pensions of public servants.

Imagine this: Imagine saying to your bank ' yeah I know I agreed to pay £400 a month for 25 years, but I find that this is unaffordable. I'm going to pay £200 for 15 years. And oh, there's no guarantee I won't find that unaffordable too in a year or so.' You'd be on the streets, or in jail. And yet this is what the government (and the last one to be fair) feels it has a right to do. If private pensions are so rubbish, then THAT is the scandal, not that public ones are so good. Private companies are more effective at ripping off their employees.

Raise taxes and make private companies provide better pensions... it's another way to go. Not that anyone listens to me or Jim. Despite his 19 letters.
Posted by Bookspy at 00:54 No comments:

Take That and Party 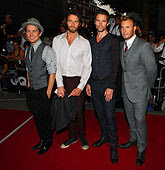 It is almost exactly a year today since I was, briefly, mistaken for a member of Take That.

It's bizarre but true. I'm in Cardiff at a Literary Event. Only it's even more desperate than usual and so I escape from the dead embrace of the Bulgarian Chadonnay, the vulcanised chicken, and the whole decidedly glitz-free atmosphere of the very very functional function room of the St David's Hotel and repair to the bar. And it's here that I find Take That hobbing and nobbing with le tout South Wales. They're in town for a gig and only some particularly well-informed groupies (all of them Ladies of a Certain Age - that age being 37 and three kids roughly -) and us, the refugees from the Ministry of Literature, know they're here.

Now, the thing about TT is that everyone knows what fat Gary looks like. And most people know what sweet Mark looks like. But no-one is very sure about the the worker-bees, the drones. Howard? Jason? Could their own parents pick them out of a police line-up? The luckiest, most ordinary pop lottery winners since Andrew Ridgeley took the vacant chair next to George Micheal on the first day of year 7 back at Bushey High School.

And so when I find myself on a banquette next to Marky and Gaz I can see the faces of the Ladies of A Certain Age, those who lost their innocence to a soundtrack of Back For Good frown in puzzlement. 'Mark and Gary look Ok,' those frowns say 'But Lordy, the years haven't been very kind to Howard-or-Jason...'

It's a good night though... There's something about the presence of a boy band - even an elderly one, even one that perpetrated horrors like that cover of Could It Be Magic - that unleashes a rich hormonal soup into a room. This soup combined with alcohol, the lateness of the hour and the fact that those of us who'd been at the prize-giving next door have just sat through a crashingly worthy lecture on the Trinidadian literary diaspora delivered by Linton Kwesi Johnson in full on FE college lecturer mode when we just want to bitch and moan and do all the other things writers do at these things - all of this mean things get, er, unusual. There's nothing like being lectured by a former radical turned pillar of the establishment to make you feel you've earned a watermelon daiquiri.

And there's nothing like watermelon daiquiris all round to make things go a bit Cocksucker Blues. (Banned documentary about the Rolling Stones when they were in their Louis 14th period). Not the band. They stay gentlemen. And not me. I make my excuses and watch.