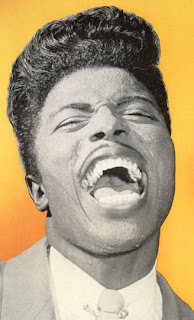 Awopbopaloobop awopbamboom. It should be written in the wildest most ridiculous font imaginable. One much more bonkers than any I have access to here. In that phrase is encapsulated the whole joyous movement from polite cocktail pop to the raucous freedom of rock and roll. The phrase - exciting enough even when just written down - expresses all the vigour, all the abandon and all the the sex of a whole new way of being. It means spare us your lectures daddio - the kids are moving in. Taking over. It's as subversive as Fight The Power, Relax and Anarchy In The Uk. As blatantly sexual as Je'Taime and with a better tune than any of them.

Awapbopaloobop awapbamboom - I can't stop typing it -These are the first words, the first noises of Little Richard's fantastic album Rockin with Little Richard. The opening lines of the war cry which is Tutti Frutti. With this track began the whole process of liberating an entire generation from the careful restraints of their parents. After Tutti Frutti (Covered by others of course, including Elvis in a version that's good but colourless when compared to the original) the kids had a whole new way of scaring their parents shitless.

Little Richard was vivid, sexually ambiguous and black. He also wasn't a kid. He was 29 when Tutti Frutti was released. He'd been around the juke joint block a few times and learned the ways of the carny. How to whip up a crowd.

Tutti Frutti is more than just a wild refrain. Awopbopaloop alopbamboom is the sound of a man responding to a sexual emergency. A man coming (!) to provide urgent relief to a nation just waking up to its hormones. In this song Little Richard seems to be in the grip of an unstoppable musical Tourettes. His whoops and whistles and yelps are all the sound of a man compelled to try an escape his band in just the same way that the new post-war generation is trying to get out from under the stifling feet of the squares.

Little Richard is way, way out there a standard bearer for the generation that didn't fight in any wars, the first generation of American youth with pockets full of spending loot and access to cars, clothes and records. A generation that had TV. That could take a date to the movies and make-out in the back seat of a ragged Ford.

This was a generation that had no need of the gentle courtship notions of Mom and Pops. And no patience with their hypocrisies either.

And that impatience is the core of this album. Tutti Frutti is an impatient song, a song propelled by a pounding secular, sexual evangelism. Awopbopaloopbop alopbamboom is like a pentecostal speaking in tongues, only at a teenage orgy after the drive-in rather than in the wooden shack of a rural church. It has the same kind of ecstatic revelation contained within it. No wonder adults hated and feared Little Richard Penniman. No wonder the teenagers loved him. No wonder they literally ripped up the cinemas during showings of his first film The Girl Can't Help It (Both the title track and Otis Blackwell's Rip It Up are contained here too).

I got Rockin with Little Richard out of Hebden Library four weeks ago and I've just been renewing it ever since. It's been a constant companion on the car stereo. Tutti Frutti is followed by Long Tall Sally, Lucille, Good Golly Miss Molly, Slippin and Slidin and other early rock and roll classics that take you over and out of yourself like an orgiastic mugging. The sexy, saxy, thump and jump of the tight little band just about keep up with their manic, sexually hyper active vocalist.

Little Richard's songs are all about celebrating the moment and they - along with the more considered and witty storytelling of Chuck Berry - did more than anything to create the iconography of rock and roll. Little Richard, Berry, the young Presley, Carl Perkins, Jerry Lee Lewis these are the guys who created the mythology of their own genre, but no-one did it with more outrageous panache than Little Richard.

How surprising it is then - upsetting even - to find that Rocking with Little Richard is catogorised by Calderdale libraries as Easy Listening. This music, the sound of authentic sexual revolution, was partly responsible for tearing down the bedroom walls between the white kids and the black kids. The parents, rightly feared that this music with its explicit calls to 'ball', would lead to miscegenation in the dancehalls. Easy Listening? White middle America didn't think so. And neither do I.

Within a year of the 1956 release of this album, Little Richard had become the Reverend Richard Penniman and put his voice and personality at the service of the Lord. For a few years after that Little Richard only made gospel records before rock and roll proved more powerful even than the voice of God and dragged him back to the dark side.

Sometimes Tutti Frutti comes on the stereo when I'm whacking the boxing bag at the gym. And I always hit a little harder for it's two minutes and 11 seconds. Actually I smack that goddamn bag a lot harder...