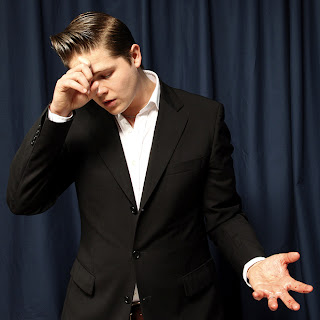 IT would, I guess, be easy to hate Luke Wright. In fact I once heard someone describe him as having 'the most punchable face at the Edinburgh Fringe.' And when you think just how fierce the competition is for that particular title... it's a bold claim.

Thing is he's young, he's tall, he's good-looking, he's funny. He has his own slot on Radio Four's Saturday Live. He packs theatres and arts centres up and and down the land. And he gets to programme Latitude. And he's generous and energetic and conscientious and - let's not shy away from the N-word - he's Nice. Really properly, trust him with your wife, your sister and your wallet nice. And now he has a lovely family too...

He's so great that he's even had an unauthorised tribute act. He was plagiarised so mercilessly and so frequently by some shameless cunt, that Luke had people accuse him of plagiarising the plagiarist. people accused Luke of pretending to be the real Luke... (and I've seen the Youtube clips of the Pretend Luke performing - he clearly has no idea what the work he's passing off as his own even means. But that's how good Luke's stuff is - it can withstand a mangling by an illiterate thieving psycho and still sound amazing...)

So of course the Right Luke arouses a lot of negative emotions. He could hardly fail to. Anyway, punchable face or not - I find him inspiring. He's always writing, always pushing himself, never settling for the routines and tropes his audiences expect. And now he's had a proper book published. He's intent on conquering page as well as stage. And I applaud him. As long as he doesn't start writing novels. That would make me nervous...

Luke's first book is Mondeo Man (Penned In The Margins) and features the political satire and the wit we expect, but it also has its moments of pathos and heartbreak too. Anyone who unthinkingly disparages Essex should read it. And shameless plagiarising cunts should have someone read it to them and explain the big words.

And in the meantime read this - I asked Luke some questions and he answered them with wit and honesty and verve. Not to mention generalised all round niceness. The bastard.
Hello Luke, give us your autobiography in exactly 50 words (not 49, not 51...)
I'm London born and Essex bred. I've been hawking my poetic wares around arts centres, theatres, pubs, school halls, comedy clubs, music festivals and car parks since 1999. I founded Aisle16. I've made six solo stage shows and one proper book. I also programme the wonderful poetry tent at Latitude.
Which writers and performers do you admire?
Larkin, Betjeman, John Cooper Clarke, Martin Newell, Tim Turnbull, Evelyn Waugh, PG Wodehouse.

As a performer I have been influenced by comedians such as Russel Brand, Stewart Lee and Eddie Izzard.

Should all poets be able to perform their work?

Not literally perform - a poet should be allowed to toil in peace and solitude. But poems are performative, even if they stay on the page they are little performances, they should dazzle, no matter how subtly.

In what ways are you an Essex Man?

That's the eulogy I want.

One of the things I admire about your work is how you write a whole new show every year... will you ever do a Greatest Hits tour?

I make sure I write a new hour every year. But these days when I tour I'm starting to do 90 mins a night so a few old ones ( and even brand new ones) get an airing too. I much prefer doing a set than a show, keeping looser and reacting to an audience. That said I will always keep writing new stuff. It's what I love most.

This is your first 'real' book? What on earth took you so long?

I've been biding my time. I wanted it to be really good. Most of the poems have been written in the last three years. I don't think I was up to it before then.

In what ways as fatherhood changed your writing?

I'm generally more emotive and empathetic. It's made me grow up, that's reflected in my writing. I also value my time more which had meant I write more.

New show - Essex Lion - all new stuff, the loose theme is "seeing what we wanted to see." My parents have moved in the last year, cutting my links with Essex so I'm focusing on Essex a bit too.

Then more of the same - touring, radio, and putting together a new book.

The stuff you hate is good, the stuff you like is shit. Read more books, do more writing. Make the most of the pills, it'll stop being fun soon.

Tell me something I don't know?

I'm having a Pot Noodle for my lunch, as a treat.