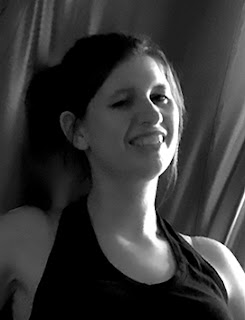 FIVE years, three novels. That's pretty good going for a literary novelist and when you factor in motherhood, studying and more than the average amount of domestic turbulence - then it's hugely impressive. But it's what Megan Taylor has managed. (If you want to dig around for what I mean by 'domestic turbulence' - then you'll find no joy here. Do your own dirty work.)

So she's a grafter. And the books themselves are intriguing, gripping and provocative by turns. The first  How We Were Lost, a dark coming-of-age story, was published by Flame Books in 2007 after placing second in the Yeovil Prize. In 2009, she was awarded an MA with Distinction in Creative Writing from Manchester Metropolitan University, where she’d started her second novel, The Dawning. This literary thriller about a family pushed to breaking point, was published by Weathervane Press in 2010.

I met her on the MMU residential where she proved that while the books might be dark, she herself has the  gift of lighting up a room full of strangers. The knack of putting the awkward and the shy at ease. This is rare enough talent anyway, and vanishingly so for novelists who tend to be awkward as a breed...

Megan’s latest book, The Lives of Ghosts (also Weathervane, 2012), plays with ideas of inheritance and motherhood, and the haunting power of memories that refuse to be suppressed. Megan currently lives in Nottingham, with her two children and is (of course) working on her fourth novel. And I asked her some stuff, and I think the answers reveal the enthuiasm with which this chronicler of ghosts embraces the real world with in all its messy glory.

Megan can you give me your autobiography in exactly 50 words (not 49, not 51)


Born 1973, in Greenwich (still love the park). Had my son at twenty-three. Years of odd jobs, studying and writing around the edges. Daughter arrived 2001 and moved to Nottingham when I was thirty. Embarked on a creative writing MA. First novel published 2007, second 2010, and now my Ghosts!

Why should I read The Lives of Ghosts?

Because everyone loves a ghost(ish) story. Or they ought to. And because it would make me very happy.

How does this book compare with your first two?

It’s more deliberately suspence-y and structure-wise, quite different. I got to play with dual timelines, which was fun. And although I remain overjoyed about having How We Were Lost and The Dawning out there, I’m extra-proud of this one (shhh, don’t tell the first two)

Cyril Connelly once described the pram in the hall as the 'enemy of promise'... what is your experience of being a writer who is also a mother?

For me, it was the opposite. From baby years on, writing only became more precious. It was a sanctuary away from the domestics and routines. Selfishly, it was just mine. In a way, it had to become more focused too, as, especially early on, it was about making the most of snatched time.

What kind of world will we be in when your kids hit adulthood?

Well, my son is almost sixteen, so since it’s not too far off I should imagine it’ll be pretty similar. Aside from the flying cars and silver hats and emerging lizard-men of course.

What are your hopes and fears for your own future?

The usual, I suspect - happiness and health to everyone I love, no more losses for as long as possible. To keep writing and having adventures. And to maybe even have some more books out there...

If there was one thing you could tell your fifteen year old self what would it be?

Don’t worry about it love, it will all be ok.

Perhaps you should reconsider the sheer quantity of that liquid eyeliner?

Who, in life or writing, do you most admire and why?

In writing, too many. The writers who I loved in my teens, and still do, who broke open other worlds for me (Katherine Mansfield, Joyce Carol Oates, Helen Dunmore, Chandler, Salinger, Carver...more). There really is no possible way for me to list the authors I admire, I’ll only miss someone out, but I’ve recently discovered the amazing-ness of Rupert Thomson. I’m currently immersed in a love affair with John Updike too, because even when he’s flawed (and sometimes especially when he’s flawed) he is beautiful.

In life, my kids. For being so brilliant. And putting up with me.

And anyone you despise and why?

There are certain politicians...but I think that’s more despair and fatigue than despising. I don’t think I do despising.

And finally... tell me something I don't know...

But surely you know everything Mr May?

Except perhaps...did you know that you must never bath a chinchilla? If they get wet, their fur is so thick that it might rot and grow fungus and fall off (you can feed them after midnight though. Allegedly.)