Mark Illis on Angela Carter, Zombies, and the importance of beating your daughter at Boggle (and much else) 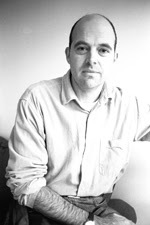 This is an experiment. I'm starting a series of interviews with artists of various kinds who I know and like and have interesting things to say. I'm calling them Tell Me Something I Don't Know and I'm beginning with a writer I know well, and like a lot.

Mark Illis is a good friend, and a great writer. Four novels, a short story collection (which I think is really a novel as well- but ssh, whisper it. He might hear you). Numerous radio plays, countless episodes of a Major Continuing Drama (that's the soap opera Emmerdale to you and me), a forthcoming film and some stage plays too. We've also collaborated now and again too.

Mark is also a natural at this interviewing game. Thoughtful, witty and provocative by turns. And honest too. The perfect interviewee... See what you think.

Hello Steve, you're very assertive, aren't you? All right then -

Born in London, got cancer, lost a leg, had three novels published before I was thirty. Three! Had sort of hanging-out-with-writers type jobs. Moved to Yorkshire. Got married. Started writing for TV. Had two kids. Two books out recently: TENDER (linked short stories) and the new novel THE LAST WORD.

Why should I read The Last Word?

It's about two spiky, prickly, damaged misfits, forced to live together for a week and see how they get on with each other. It's a mystery story in which a dead character (in a non-zombie sort of way) is as important as the two living ones. A spider plays a crucial role. The ending may surprise you. It's a serious novel and,I hope, a moving one. For more information look on markillis.co.uk.

How does this book fit with your others?

It's the fifth one. Comes after the fourth. Also, TENDER was concerned with family, how those relationships form us and enable us and sometimes hold us back, whereas THE LAST WORD is more about looking outward, in that short or long space between leaving the family you were born in and finding the family you create, when you can feel quite alone in the world. Also, TENDER and THE LAST WORD were written a long time after the first three novels, after I'd been writing TV for a decade. Are you going to ask about that?

You work as a writer on Emmerdale - what are the links, if any, between your prose fiction and your television writing?

Emmerdale is a story machine. It's hungry for story, six episodes a week of it, 52 weeks a year. So when you work on it for a while, you get quite interested in how story works, how it builds and develops, goes through quiet periods, reaches crisis points. I like story. I also love good dialogue and strong characters and Emmerdale has those too, but you can make too much of this. I loved story, dialogue and character before I wrote for TV, and I love language, I love splashing around in the strangeness of it, making it do things it's not used to, and TV isn't famous for its love of language.

And is it true you've written a zombie film?

Are you going to ask everyone this question? I hope so. Yes, it's true. I've written a zombie film. Or I wrote the script, based closely on a story that Dominic Brunt and Jo Mitchell came up with. BEFORE DAWN. It was a micro-budget thing, but it'll be showing in zombie festivals next year, may have some sort of tiny release in cinemas, will be available on DVD. The first half of the film is basically a relationship movie, in which a couple go away to a remote cottage, in a last gasp effort to repair their relationship. And then things go horribly wrong. My daughter gets eaten in it.

What do you do when you're not writing?

When I'm in my office, if I'm not writing I'm probably playing online scrabble or sleeping. I have a very nice red sofa, very comfortable. I get to the cinema when I can, but these days it's mainly kids' films. Luckily there's some fairly decent ones around. I loved Super 8. I like the theatre but I get to that even less. Saw a couple of great things at the Edinburgh Festival though. And TV. I liked The Killing and The Hour and I loved Game of Thrones. And of course a big shout out to Emmerdale. And then there's reading, obviously. Lots of reading. And family. Should I have mentioned them first? Going out with my wife, a meal somewhere, a friend's house. Dr Who with the kids. Table Tennis and Boggle with my daughter, (both of which, I'd like to make clear, I still win.)

Who - in writing or in life - do you admire and why?

How about Angela Carter? She was a generous tutor, a close reader, a frank critic, as well as, obviously, an inspiring writer. How great is it in the last line of your novel, to have someone looking at someone else with 'wild surmise'? She died much too young. When I first met her there was a storm crashing above us. Suddenly a streak of lightning crackled through the sky. 'Sorry,' said Angela. She asked me which writers I admired. I told her I was a bit torn between Salinger and Dickens. She winced. 'Make it Dickens,' she said.

What do you think about the Man Booker shortlist and does it matter?

I have to be honest and say I haven't read any of them. Not one. But I do like the fact that smaller publishers and less well-known names got a mention, and yes of course it matters. It raises the profile of writers and writing so that must be a good thing, even if it is just posh bingo as, I think, Julian Barnes said. I have read David Mitchell's novel, The 1000 Autumns of Jacob de Zoet, if that's any good to you? I love David Mitchell, think Cloud Atlas was a masterpiece, but this one's disappointing.

What are you working on now?

A novel, set mid 19th century. It's my first ever piece of historical fiction, inspired I think by the fact that I love Dickens, and by the fact that if you want to write about inequality, intriguing characters, gender roles and pointless wars, tthen there's no need to feel confined to the 21st century. Also, I'm quite lazy, but rearch is made a great deal easier by the internet. I've loved writing it, it's raced along with a real sense of momentum, so I hope it'll be quite a staggering success.

Recommend something (it doesn't have to be a book)

I recommend you go to Hebble Hole in the first half of August to pick winberries. Go fairly early so no one else is around. It'll probably be raining, but if you're lucky the sun will be dappling through the leaves, the river chuckling away. We go there, and my wife will later make a goergeous winberry pie. (I'm not actually recommending that you ask her to make you one.)

Where do you see yourself in ten years time?

Oh God, I don't know. Alive would be good, that's always my starting point. And healthy, and reasonably happy, but a faint air of melancholy is acceptable. And going on holidays that don't necessarily involve the children. And still writing fiction and TV with some success in both. That would be lovely, thanks very much.

Tell me something I don't know...

THE LAST WORD's dedicated to my brother (who probably won't care unless it's freakishly successful.)