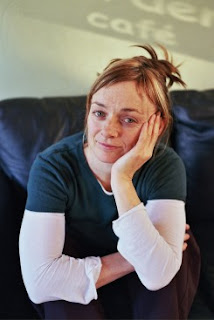 ON the day that the (all-male) shortlist for the Arthur C Clarke Award is announced it seems fitting to profile a writer best known for her first book, I HAVE WAITED AND YOU HAVE COME. This book imagines a bleak near-future where rising flood waters have pretty much drowned Cheshire.

I am an admirer of those writers who don't stand still or repeat themselves and Martine heads back in time with her second book. Heading to mid-seventies Bristol for AFTER PHOENIX a book about how a family struggles to deal with loss and grief.

Martine McDonagh writes simply, sparingly, intelligently and unsentimentally about both big and small things and she also doesn't take herself too seriously. As you can see in the answers to my questions.

Born at the northern end of the A23. Moved to Bristol area. State-educated. Grew up in a psychiatric hospital, thanks to father’s occupation. Thirty years in music industry. Single parent, one son. Mature Degree and Masters. Writer. Lecturer. First novel first published 2006. A few brushes with death. Still breathing.


Why should people read your I HAVE WAITED or AFTER PHOENIX?


My first novel, I Have Waited, and You Have Come, is dystopian anti-chicklit – a stalker story with an unreliable narrator set in a climate-changed future, so might suit people who like creepy female characters and being scared.
The new one, After Phoenix, might appeal to someone interested in how differently the members of one family react to the same tragic event. Especially if they grew up in the seventies, or are interested in how people communicated pre-upspeak.

What is your most pressing concern right this minute?

I’ve never been a man - although I do love football and hate shopping - so I’m not entirely sure, but having spent time with male writer friends I get the impression that they find it just as difficult. Although, men are very good at giving that impression to women because they know eventually some sucker will come along and do the things they say they can’t do for them. Doesn’t work with the actual writing though…but then there’s that word muse…hmmm.

Who - in life or writing - do you most admire?

Why do we need the Women's Prize for Literature?

Because despite the majority of readers of fiction being women (maybe this is changing with the increasing popularity of electronic reading gadgets) and the majority of publishing employees being female (based on no true statistic, just a general impression), male writers still seem to be taken more seriously than women writers. And if that’s not true, well then if we say we need it, it’s because we just do. Okay?

Would you eat a mucky fat sandwich?

No thanks. But after a long hike I do enjoy the vegetarian equivalent: cheese pie, chips and gravy.

What will the next book be about? (does it have a title yet?)

In Cannery Row, John Steinbeck says this about superstition: ‘It’s all right not to believe in luck and omens. Nobody believes in them. But it doesn’t do any good to take chances with them and no one takes chances.’

I’m not superstitious, so yes, it does have a title, and the central theme is narcissism.

If you could be anywhere right now, it would be....?


I’m pretty happy in Redondo Beach, California at the minute. It would be quite nice to have somewhere to live when I get back to the UK though.

Tell me something I don't know...

Men are great too.


I Have Waited And You Have Come is published by Myriad AFTER PHOENIX is published by Ten to Ten Publishing and both are available in the better kind of place
Posted by Bookspy at 05:25